A new football conference, seeking to secure FBS status, will be formed with UNA as a member.  The noted article also states that UNA has already signed a “multiparty term sheet agreement” to commit to the new conference.   This is not putting the cart in front of the horse; it’s putting wagons in front. The UNA Board of Trustees President has stated, “If you were going to make a major move, there would be major financial implications for that.  We haven’t reviewed that.  None of that has been presented to us (Trustees).  All these kinds of things would be required if we were going to make a move.”  Wagons!

To become a FBS member, UNA must average at least 15,000 fans at home games over a two-year period.  It is assumed this average is a requirement prior to having FBS status.

Four years ago, the current administration announced plans to build a 10,000-seat football facility on campus where the baseball facility is currently located.

A new baseball facility was to be built at Cox Creek Park.  Is this plan no longer in play?

In addition, the administration, with Trustee approval,  began charging students a fee of $30 per semester hour to help pay for the new football facility.  The title of this fee is General Studies Fee!!  The title should be Football Facility Construction Fee (FFCF)!  If a student graduates from UNA with 120 credit hours, a total of $3,600 (120 x $30) has been paid toward the cost of the football facility.  US News World Report in their 2021 report, stated that the “Average total indebtedness of 2020 graduation class (UNA) was $24,135.”  If this was for a student who paid the FFCF for four years, the $3,600 is part of the indebtedness and would increase interest.

This isn’t fair to UNA students, and the amount paid should be refunded immediately.   If it is not too late, my suggestion to the Trustees is to make a call to the Big South Conference seeking membership for UNA football.  Currently, the Big South has eight teams that play football as FCS members.

The following is from the article:  “UNA has not provided either an athlete or school budget for 2022.”

In addition, UNA has not provided the amount due Coach Willis for the two years that remained on his contract; UNA has provided neither the salary of the new head coach nor the salary of his assistant coaches.

Does the TimesDaily have plans to issue a Freedom of Information request to UNA for the noted items?

I must recognize David Glovach, the TimesDaily Sportswriter, for his excellent article on this matter.

What is your preferred way of celebrating Valentine's Day? 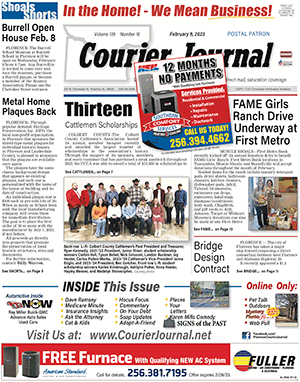