FLORENCE – The Burrell Schools Alumni Association is celebrating the legacy of historic Black Florence schools with special “Keepers from the Bleachers” plaques. The Association has commissioned a limited number of unique keepsakes created from original wood from the Burrell School Gymnasium Bleachers and made them available for purchase.

Burrell Schools Alumni are students who attended any of the three Florence schools. Burrell Normal was Founded in 1903 by the American Missionary Association of New York. It was built on Cherokee Street at the current location of Burrell-Slater Schools on land purchased by Black and White citizens together. Slater Elementary was established years earlier by the city of Florence and originally located on South Court Street. The school became Burrell-Slater in 1951. After the school building on Court Street burned down in 1958, students transitioned into the combined Burrell-Slater school on College Street.

According to Burrell Schools Alumni President, Odessa Bailey, the plaques were made possible by the generosity of Florence City School Superintendent Jimmy Shaw and were created by Florence High School students. Superintendent Shaw credited creation of the plaques to students in the Agri-Science Department, led by Matt Ball and David Wiggington. Shaw commended the students for their work.

To view or purchase a “Keepers from the Bleachers” plaque, contact President Bailey at 256-766-0663, or members of the Burrell School Alumni Association. Plaques come with descriptive labels and are $15. They will be sold until inventory is depleted.

The Burrell Slater Museum is located in the Burrell School, 127 South Cherokee Street in Florence. Tours are available by appointment or during specially announced events.

When will we see a railroad overpass in Sheffield with vehicles going across it?

Congressman Robert Aderholt released a statement last week announcing a grant in the amount of $2,000,000 for environmental, planning, and design work on a long-anticipated railroad overpass in downtown Sheffield. However, no construction funds were included. 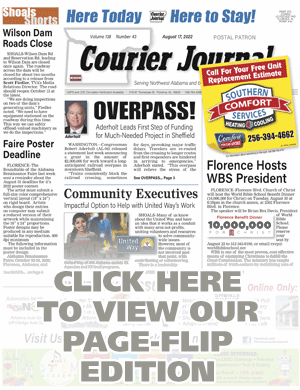