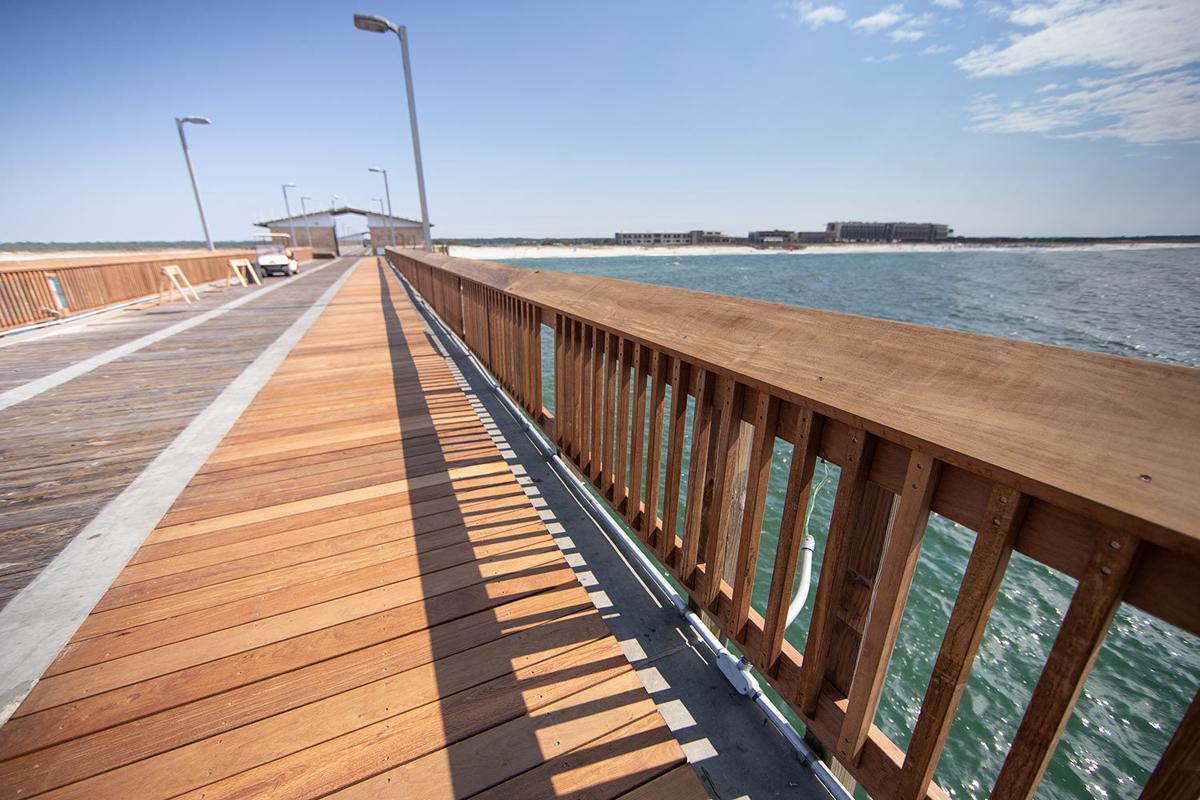 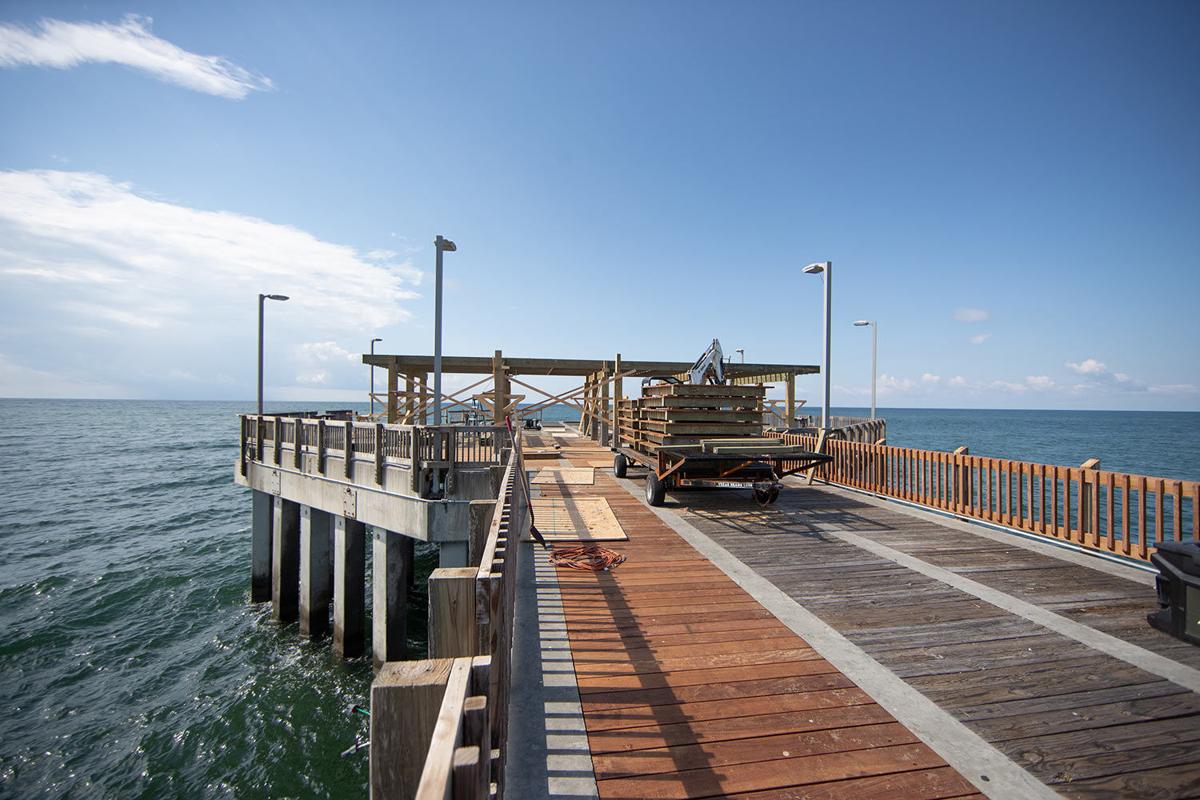 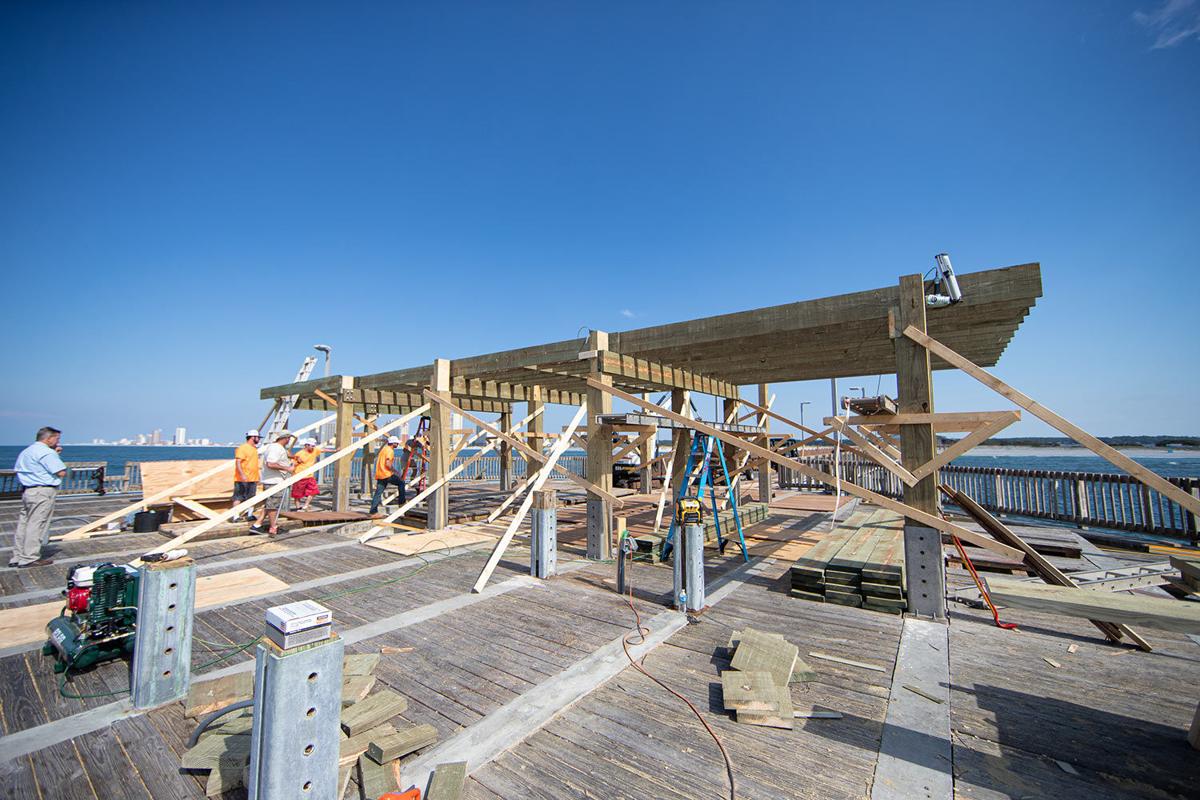 Lamar Pendergrass believes in the old saying that good things come to those who wait.

The timing of the renovations to Gulf State Park Pier is not what was planned, but Pendergrass assures everyone it will be worth the wait.

“This is going to be what sets the example for any pier that is built on the Gulf of Mexico,” said Pendergrass, Alabama State Parks South Region Operations Supervisor. “If people want to see something that is state-of-the-art and done the right way, this is where they need to be.”

The $2.4 million renovation of one of the premier piers on the Gulf of Mexico is expected to be completed in July after all the decking and handrails have been replaced as the major part of the renovations.

“The problems with the wood we’ve had in the past are rot and deterioration, the effects of weather and the elements over time,” Pendergrass said.

The treated pine timber on top of the pier decking is showing severe wear and tear with splintering and erosion to the point of being unsafe.

“It’s not just the top; it’s the understructure,” Pendergrass said. “The understructure is pine also, and it’s rotten too. We have nothing to screw the deck boards into. Even with 3-inch screws, the joists are too deteriorated to get the board secured. There’s nothing left to hold the board down.

“For practicality and safety issues, we couldn’t delay this process any longer.”

Instead of composite material, a sustainably sourced Brazilian hardwood called ipe (pronounced eepay) was chosen for the decking and top boards on the handrails.

“Ipe is very, very dense and very hard,” Pendergrass said. “It has to be predrilled to secure to the joists. You can’t just drive a screw into it.”

Pendergrass said screws that have been inserted into the ipe are difficult to remove.

“I tried to back out a screw that was in a piece of demo wood, and the head of the screw just popped off,” he said.

Pendergrass said ipe has a projected lifespan of 30 years compared to 10 years for the treated pine that is being replaced.

“Ipe doesn’t flake or become brittle and splinter up on you like the pine will,” he said. “It’s much harder to cut into, which should alleviate some of the incidents where people like to cut their names into the handrail or cut bait on the handrails. That means less wear and tear and less time our staff will have to use to change out boards and rails.”

Instead of the top boards on the handrails lying flat, the boards are tilted to prevent anglers and visitors from leaving material on top of the handrails, and Pendergrass hopes it will discourage birds like gulls and pelicans from using the handrails as perches.

“With the flat boards, we were constantly having to clean them and wash them down,” Pendergrass said. “This will make it a lot easier for us to maintain.”

The light poles that currently extend about 18 feet above the decking will be replaced with poles that are about 10 feet tall. The new lights will be LED lights that are turtle-friendly and have six-inch shields to block portions of the light beam.

“We’re also going to install a dimmer, so that during turtle season we’ll be able to dim the lights even more,” Pendergrass said. “We’ll still have enough light for people who fish, but it will be turtle-friendly. The new lighting will not only be on the pier but in the parking lot also.”

Pendergrass knows that some dedicated pier anglers were not too happy when the scheduled work on the pier was delayed from last winter to this summer. He said it couldn’t be avoided.

“In a perfect world, we would have started this work in January,” he said. “That is what we had intended to do. Then we were contacted by NOAA (National Oceanographic and Atmospheric Administration) that they were going to require a biological opinion on this pier to assess impact on endangered species.”

Normally, a biological opinion takes about a year to complete. Pendergrass said Conservation Commissioner Chris Blankenship shepherded the opinion process, and the opinion was issued in just a few months.

“The Commissioner really worked hard to get this done,” Pendergrass said.

The award conditions in the biological opinion will require Parks officials to not only maintain the pier as a fishing pier but also as an education pier. Pendergrass also said a diver will have to be deployed at least once a year to inspect the pier structure and assess the marine environment around the pier. Parks staff must also clean monofilament fishing line from the pier pilings annually.

“Visiting the Gulf State Park Pier is almost a rite of passage for people who come to Gulf Shores,” said Commissioner Blankenship when the work began earlier this year. “Because it is such an important part of our park, we are absolutely dedicated to maintaining the pier and ensuring it is safe and accessible to our many thousands of guests. We also want to make it is as environmentally friendly as possible for sea turtles and other wildlife.”

Pendergrass said new sea turtle protocols will be in place when the pier reopens to make sure any sea turtles that are hooked will be handled and released properly.

Pendergrass admitted Gulf State Park was losing significant revenue from the pier during the summer months, but it couldn’t be avoided.

“We didn’t have a choice but to shut the pier down when we did,” he said. “We had to shut it down for the safety of the anglers and visitors.

“We literally couldn’t keep up with the repairs. We were changing boards out every day, and we were dealing with the old lighting as well.”

In addition, the pier will get a new and vastly improved fish-cleaning station. Instead of just cleaning the fish and tossing the carcasses into the Gulf, anglers will be able to put the fish carcasses into a commercial grinder, which will masticate the remains and then pump them into two underground holding tanks in the parking lot. The tanks will have a treatment system that will allow the contents to eventually be removed through the sewer system.

“We do think by basically not adding chum to the water, we won’t draw as many sharks, and we hope to reduce the impact on sea turtles,” Pendergrass said.

One new feature of the revamped pier will be a 50-foot by 24-foot observation deck at the octagon on the end of the 1,544-foot-long structure.

“When the pier was rebuilt about 10 years ago, there were plans to have an observation deck, but they ran out of money,” Pendergrass said. “It isn’t a new idea, but it is new that we are going to expand it and make it larger than originally planned. With the education component, we felt adding an observation deck would allow the people to come and sightsee on the pier without interfering with the fishermen.

“This way, those sightseers will be elevated above the fishermen and can observe what is going on and get their pictures. It will be good for the general sightseer but also the school groups. Our naturalists bring a lot of school kids out during the year. Those kids will be able to step out on the observation deck in a safe manner and see the activity on the end of the pier.”

An Americans with Disabilities Act (ADA) certified lift will be on one side of the observation deck with stairs on the opposite side. Pendergrass said the ADA lift will be operated only by pier personnel.

“The lift won’t be used like an elevator,” Pendergrass said. “Anyone who needs access to the lift will have to check in at the office. Our personnel will come down with a key and assist the person in using the lift. We will be there to get them up on the deck and then get them back down safely.”

Pendergrass also said the bathrooms on the pier will be renovated as well as the concession areas.

“We’re updating the bait shop and installing new counters that will make it easier for the pier personnel and the customers to communicate,” he said. “After we’re finished, it’s going to be the premier pier destination on the Gulf.”