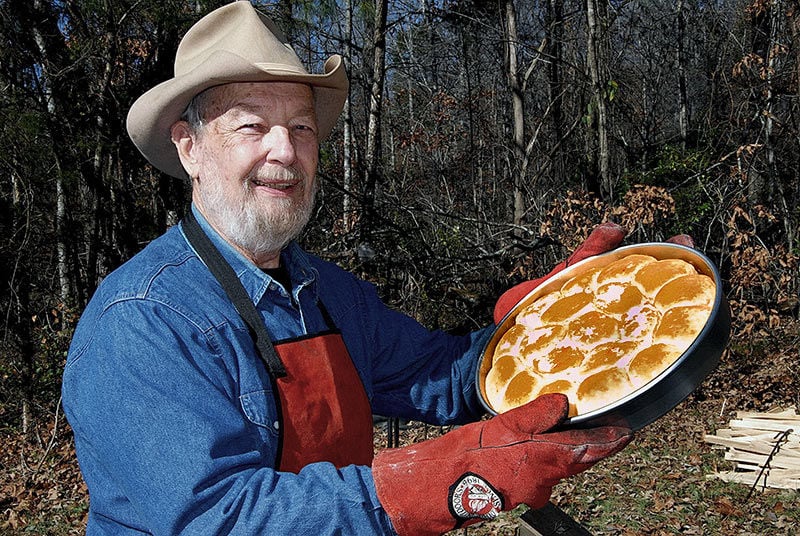 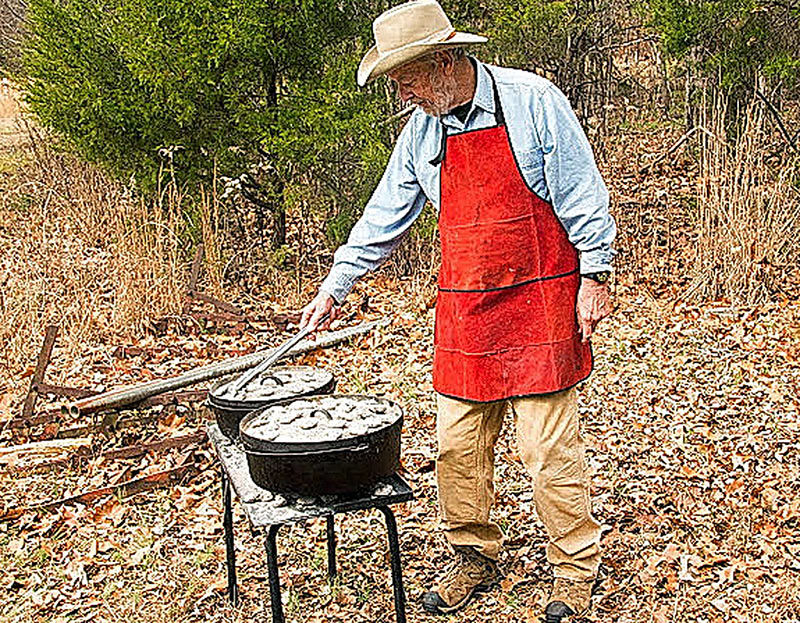 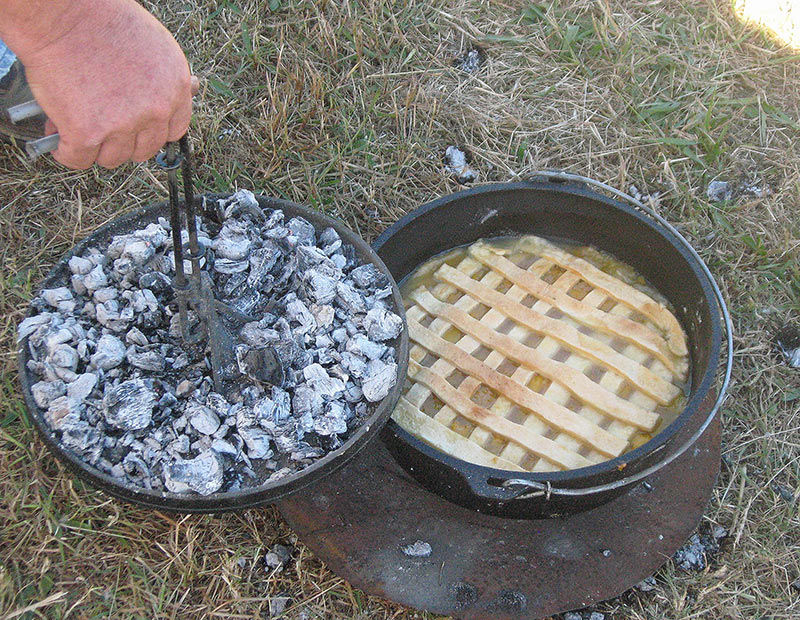 Now that the weather has finally cooled, the outdoors takes on a whole new appeal for many in Alabama. Hunting and camping are likely on the agenda, and being able to feed a delicious meal to a group of hunters or campers can often hinge on your upbringing.

If you’re like J. Wayne Fears, who calls Tater Knob in Jackson County, Alabama, home, it means breaking out the cast iron, just as his ancestors did while trapping and living off the land in north Alabama.

What Fears finds interesting is that a new generation is discovering the benefits of cast iron.

“Millennials are discovering the advantages of cooking on cast iron,” said Fears, a certified wildlife biologist and prolific outdoor writer. “My grandma knew that. Lodge (Manufacturing in Tennessee) had to build another foundry because of the popularity of both the cast iron skillet and the cast iron dutch oven.”

When it comes to cast iron dutch ovens, two different models are available for distinctly different purposes. The flat-bottom dutch oven is made to be used on conventional stovetops, while the dutch oven with legs is designed for outdoor cooking at campfires with coals from the fire or charcoal briquets.

“For camping, you need a dutch oven with three legs and a recessed lid,” said Fears, who held a seminar recently at the Southeastern Outdoor Press Association annual conference. “The legs keep the bottom of the dutch oven off the coals, so you don’t burn everything. It has a recessed lid so you can put coals on top to use it for baking.”

Fears honed his dutch oven expertise during numerous years of overseeing hunting operations all over North America, including the western U.S., Canada and Alaska.

“Especially in our remote camps, we depended on dutch ovens to do a heck of a lot of our cooking,” he said.

If you’re planning a hunting or camping trip, or just cooking on an outdoor campfire, Fears recommends certain cast iron cookware to achieve a delicious meal. If you expect to draw a crowd when the smell of the cooking spreads, Fears recommends a No. 12 dutch oven. The No. 12 is the diameter in inches of the pot. Fears said you might need more than one, possibly in different sizes.

“It depends on what you’re cooking, whether it’s a stew and a pan of biscuits. You’re going to need one for each,” he said. “For the stew, I’d recommend a No. 12, and a No. 10 dutch oven so you can cook some cathead biscuits.

Fears also recommends that you don’t look for the cheapest dutch oven you can find.

“I want to stress to get a quality dutch oven,” he said. “There are so many dutch ovens made overseas that are pitted or they’ll shatter if you drop them. If you get good quality cast iron, it can be a lifetime investment. In fact, a lot of my dutch ovens are in their third generation.”

Fears doesn’t discount the value of cooking with coals from the campfire if you’re in remote locations. However, if you can take a sack of charcoal briquets with you, your meals will likely be more palatable.

“Charcoal is just better as far as consistency and heat control,” he said. “Most people who cook with dutch ovens can go either way. With a little practice and good hardwood coals from the campfire, you can cook just as good as you can with charcoal. But most people who are just camping will use charcoal briquets because it’s a lot easier to fool with and the temperature is more consistent on top and on bottom.”

Contrary to what you may have seen in western or pioneer movies and TV shows, veteran dutch oven cooks have more heat on top than on bottom.

“You want to use twice as many coals on the lid as on the bottom,” Fears said. “You’re cooking down more than you’re cooking up. Most people, when they first start, they want to stick a dutch oven right in the middle of the campfire and put a few coals on top. Generally, they’ll burn everything on bottom, and it’ll still be rare on top. That’s why you have the lipped cover so the briquets won’t roll off of the top.”

Fears admits to making a “world of mistakes” while learning the fine art of dutch oven cooking and says adjustments have to be made depending on conditions.

“You may have a recipe that says cook at 350 degrees for 45 minutes,” he said. “Well, 45 minutes in a dutch oven in Ely, Minnesota, is different than 45 minutes in Montgomery, Alabama. The wind, humidity and outside temperature have effects. You have to learn to see how the conditions affect the cooking.

“You’ve got to be patient and, every now and then, take a peek at what’s going on in the dutch oven so you can learn what you’re doing. And I rotate the lid about a quarter-turn every 15 minutes so that if you have any hotspots, you’re moving them around.”

Fears also said not to skimp on the amount of charcoal you light when you start cooking.

“Always have plenty of coals,” he said. “If it’s cold, like it is now up on Tater Knob this time of year, you need to have more coals waiting when the first ones are burned up.”

Fears also recommends a pair of heavy-duty gloves because just about everything you touch will be hot. He also recommends lid lifters that are capable of lifting a dutch oven filled with venison stew that might weigh 40 pounds.

“A coat hanger is not going to quite get the job done,” he said.

Fears has also learned that one of the best ways to use a dutch oven is to use it as just that, an oven. He takes a wire rack and places it in the bottom of the cast iron and uses a heavy-duty aluminum pan that fits on top of the wire rack to cook the food.

“The food doesn’t come in contact with the cast iron, and it saves you a ton of time for cleanup,” he said. “Having said that, the easiest way to get started with a dutch oven is to go to the supermarket and get a peach cobbler mix and two cans of peaches. Follow the instructions on the box and cook several cobblers in your dutch oven. You can learn more cooking cobblers than you can anything else.

“Once you have mastered peach cobbler, move up to stew or chili. Then when you get that mastered, you might want to make sourdough cathead biscuits. It’s not difficult. You just have to get out and actually do it. Anything you can cook in your oven at home, you can cook in a dutch oven. But I burned a lot before I figured it out.”

Fears’ “Lodge Book of Dutch Oven Cooking” is about to be translated into a fourth language. It’s filled with cooking tips and recipes.

“The book is selling really well in Japan right now,” Fears said. “They’re cooking a lot of rice dishes, and it’s easy to burn rice if you’re not careful.”

Of course, when the meal is done, it’s time for cleanup. One cardinal rule prevails when cleaning cast iron.

“Never use soap,” Fears said. “You can get these pot scrubbers that look like chain mail that work really well. If your cobbler spills over, pour hot water in it and hit it with that chain mail scrubber.”

For those looking for Christmas gifts, other than his book, Fears recommends a wire rack, heavy aluminum pan, chain mail scrubber, whisk broom for removing ashes from the lid, a small fireplace shovel to move coals around and a quality lid lifter.

“And wear some good boots or shoes,” Fears said. “No sandals or flip flops. If you do, you’re going to have some interesting scars on your toes.”