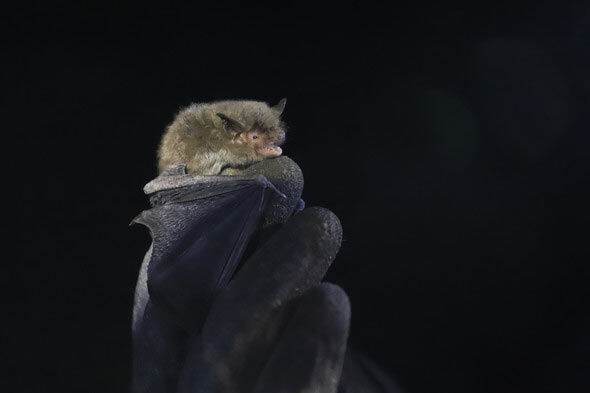 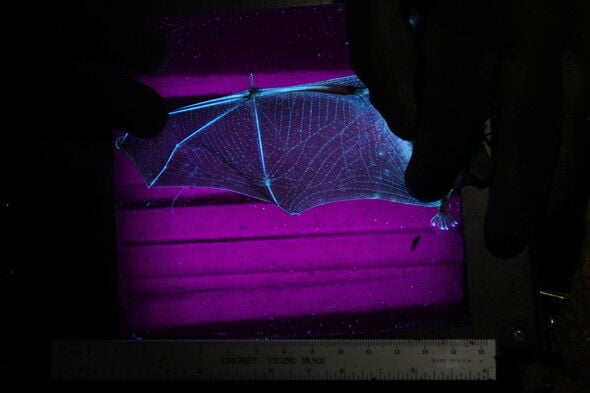 Biologists have recently discovered a new Indiana bat hibernaculum (a shelter occupied by hibernating bats) in Alabama, bringing the known number of active Indiana bat caves in the state to four. The location is the southernmost known hibernaculum for the species across its range that extends north to Canada.

“The Indiana bat is exceedingly rare in Alabama, and this new discovery continues to improve our understanding of this endangered species in the state,” said Nick Sharp, Nongame Wildlife Biologist with the Alabama Department of Conservation and Natural Resources’ (ADCNR) Division of Wildlife and Freshwater Fisheries (WFF). “In 2017, researchers also discovered the southernmost known Indiana bat summer maternity colonies in the forests of the Oakmulgee Ranger District (Talladega National Forest) near Tuscaloosa.”

The newly identified hibernaculum is located in Shelby County, Alabama, and is closed to the public.

This is the same site where biologists identified a Southeastern bat infected by White-Nose Syndrome (WNS) in 2017. A specimen was collected at that time, and the infection was confirmed by the U.S. Geological Survey’s (USGS) National Wildlife Health Center. An ADCNR press release later that year announced the first Southeastern bat confirmed with WNS in the U.S., adding the species to the list of 13 other bat species known to be susceptible to the disease.

A separate bat research project conducted by the USGS National Wildlife Health Center has discovered that the WNS infected bat from Shelby County was misidentified in 2017. It is now believed the WNS infected bat was an Indiana bat. Additional research also suggests the Southeastern bat may be resistant to WNS.

Dr. Jeff Lorch with the USGS National Wildlife Health Center has developed methods to identify North American bats based on their DNA. Many bat species, including the group to which the Indiana bat and Southeastern bat belong, are challenging to identify based on their outward appearance. The use of DNA sequencing helps distinguish between bat species that outwardly look very similar.

When Dr. Lorch examined the DNA of the bat identified as the first Southeastern bat infected with WNS, he discovered its DNA matched that of Indiana bats and not Southeastern bats. He consulted with the biologists who collected the bat, but a re-evaluation of the bat’s external characteristics could not confirm the identity of the species.

In March 2020, biologists returned to the Shelby County location to conduct a new survey of its bat population. To assist in identifying Indiana bats, Darwin Brack, a field biologist with Environmental Solutions and Innovations in Ohio, also took part in the survey due to his extensive experience with the species.

“We now believe the bat confirmed with WNS was an Indiana bat and not a Southeastern bat,” said WFF’s Nick Sharp. “At this time, there is little evidence to suggest Southeastern bats are susceptible to WNS.”

Since the Southeastern bat was misidentified in 2017, WFF biologists have collaborated with Dr. Joe Johnson of Ohio University and Dr. Andrew Edelman of the University of West Georgia to investigate the susceptibility of Southeastern bats to WNS. Some bats can carry Pseudogymnoascus destructans (Pd), the fungus that causes WNS, but not become infected with the disease.

In 2018, 62 bats from the Shelby County location and one other cave in the region were examined for the presence of Pd and WNS infection. The bats’ wings were photographed under a UV light, which causes tissue infected with Pd to fluoresce. The wings were then swabbed to collect DNA evidence of the fungal pathogen. Lab results from the swabs showed 56 of the bats tested positive for the presence of Pd. However, no bats exhibited fluorescence indicating WNS infection when photographed under the UV light, suggesting Southeastern bats may be resilient to WNS.

The continuing effort to monitor WNS in Alabama is conducted through a collaboration between WFF and its partners including the USGS, U.S. Fish and Wildlife Service, Environmental Solutions and Innovations, Southeastern Cave Conservancy, Copperhead Environmental Consulting, Ohio University and the University of West Georgia.

Supreme Court Justice Ruth Bader Ginsburg's passing has set off a political procedural firestorm. What is your take on filling her seat?