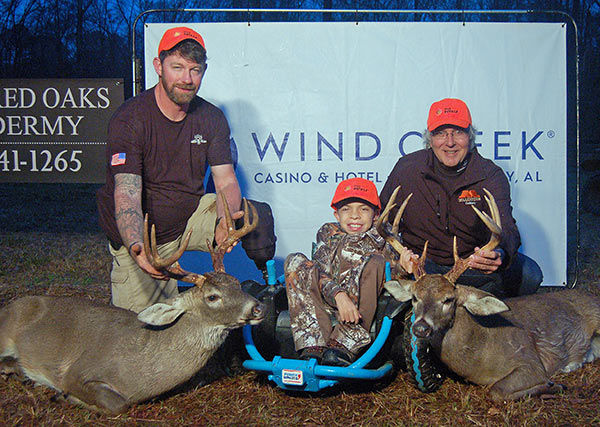 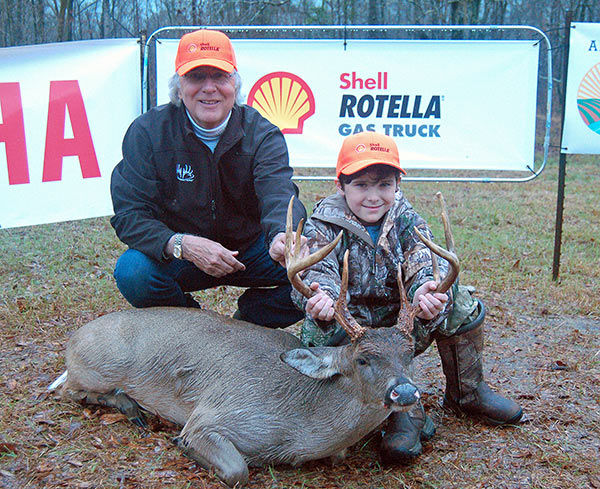 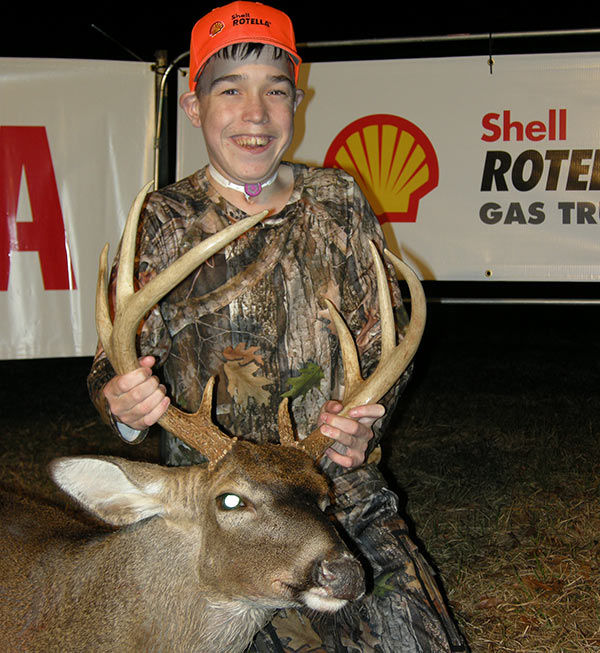 Copeland Spires was able to bag a trophy buck during the Classic. (Ryan Noffsinger)

Copeland Spires was able to bag a trophy buck during the Classic. (Ryan Noffsinger)

The consensus was that the recent 2020 Buckmasters Life Classic event may not have been the warmest at around 70 degrees for the three-day January deer hunt, but it was probably the wettest.

Persistent rains during the event at one of Alabama’s premier wildlife properties, Sedgefields Plantation near Safford, failed to dampen the enthusiasm of the hunters who deal with a variety of challenges on a daily basis.

It was fortunate for Colton Woolbright of Gordo, Alabama, that the weather was not frigid because of his battle with cystic fibrosis.

Colton’s dad, Rodney Woolbright, said his son was diagnosed with the malady just a few days after his birth.

“We deal with it the best way we can,” Rodney said. “They’re always making improvements with the medicine and treatments, and it’s all in God’s hands.

“He’s been doing real well lately. He’s had different bacteria growing in his lungs that we’ve had some tough battles with. But our pulmonologist and everybody at the hospital come up with the best treatment plans. It’s working right now.”

The elder Woolbright said they have to pick the days when it’s prudent for Colton to go hunting.

“We try not to hunt when the weather is bad,” Rodney said. “We’d rather stay at home for those two hours of hunting than be in the hospital for two weeks. We hunt when we get the opportunity and the weather cooperates when it’s not rainy and cold.

“We had to do the best we could during this hunt. We’ve had a lot of rain, but it’s been warm, and we made it work.”

Colton, 9, braved the intermittent downpours to bag a beautiful 10-point buck on the second day of the hunt.

“My guide spotted the buck behind us,” Colton said. “It came through some sedge. I tried to get him in my scope, but he kept on moving, so I put my scope to where he was moving to and shot him in the shoulder.

“He ran about 50 yards and he dropped. That was pretty cool.”

Rodney said a few deer had been spotted that morning but nothing his son wanted to shoot with his rifle loaded with a .300 Blackout cartridge.

“Then this deer came in on the back side of the blind,” Rodney said. “Our guide was looking out the back of the blind and saw the deer coming around. We got the gun out and got ready. Colton’s heart started pounding. We had to sit there and wait until the deer made its way around the blind. He finally showed up about 50 yards in front of the blind. Colton put the shot on him. Like Colton said, about 50 yards later, the buck just fell over.”

“We celebrated with a lot of high-fives,” Colton added.

One of the hunters from Alabama was able to take the first deer, a nice 8-point, of his hunting career. Copeland Spires of Prattville, Alabama, was on just his second deer hunt. His older brother, Taylor, got to witness the hunt.

“We had seen two deer before the buck came in at 4:30,” Spires said. “I got real excited and shot him. He was about 100 yards and made a good shot. The deer ran about 80 yards, so we had to go look for him. When we found him, we celebrated and took a lot of pictures.”

Spires is dealing with bronchiolitis obliterans, which has significantly limited his daily activities.

“He’s basically breathing off one lobe of one lung,” said his father Dan Spires. “It really limits what he does without his ventilator machine.”

The elder Spires said the Life Classic was a special time for Copeland, and he was happy that Taylor was there during the eventful hunt.

“For him to kill his first deer with his older brother – they have a special bond that I cannot explain,” Dan said. “It couldn’t have happened any better than to have his brother with him. It’s been a very blessed time.”

Included in the Life Classic were two Marines as part of the Hope for the Warriors program.

Staff Sergeant Jeremy Austin, who lost both legs to an IED (improvised explosive device) in Afghanistan, managed to bag two bucks during the event.

Austin spent 12 years in the Marine Corps and was on his second tour in Afghanistan when the Humvee he was in exploded.

“The truck took the brunt of the explosion and I got the rest,” he said. “My lower legs were destroyed in the blast. It fractured my pelvis, broke ribs, broke my elbow, knocked my teeth out and fractured two vertebrae. I got busted up pretty good.”

The amount of blood that Austin was given in the three days after the blast indicated how precarious his situation was.

“The human body holds 10 to 12 units of blood, depending on the size of the individual,” he said. “If you average that out to 11, the first day I got hurt I took 18 units of blood. The second day I took 12. The third day I took five. That’s three times the volume of blood the body holds. If you ask my momma, she says I was just too stubborn to die. I’m fortunate to be here. Donated blood and the Good Lord kept me here, so every day above dirt is a blessing.

“This has been a phenomenal experience to see these kids and all their smiles. I was fortunate, for a lack of a better term, to be an able-bodied individual for 28 years of my life. These kids know nothing different. It’ll humble even the most hardened souls to see these kids having the can-do attitude and wanting to get after it, hunting-wise.”

Even the biggest deer of Austin’s career, a huge 8-point, didn’t compare with the joy he saw on the kids’ faces, especially Jack Speegle of Tennessee, who took a big 12-point on the second day of the event.

“No disrespect to my buck or the guide and cameraman with me, but I was more excited to see Jack’s buck and seeing that big, ear-to-ear smile when he was telling that story over and over again,” Austin said. “That’s chicken soup for the soul.”

Austin said Sedgefields’ Jimmy Hinton was his guide on the hunt when he shot the big buck, and Hinton had hinted that the deer might respond when the heavier rain started to fall.

“We saw a few deer, and then when the rain got heavier, the deer just flooded into the field,” Austin said. “We saw eight bucks and four does. We saw another buck that had taller antlers, but he didn’t have the mass of my buck. This Sedgefields Plantation, they’ve got some healthy animals and plenty of them.

“This buck is definitely going on the wall. I shot an 8-pointer in Texas a few years ago, but this buck has such good mass. I’m going to have a mid-sneak mount to be able to see that thick neck he had. That’s part of the memory. You want to honor the animal as best you can. It’s a trophy, but it’s a trophy that brings that memory back. As hunters, that’s what we try to do, to remember the hunt and remember the people you met on a hunt like this.”

Buckmasters Founder and CEO Jackie Bushman said he will never complain about the weather as long as the hunters have success at the Life Classic.

“What’s clear to me is that Jimmy (Hinton) and his many volunteers have done a heck of a job to give these hunters the opportunity to take a buck of a lifetime despite the rain and 70-degree weather,” Bushman said. “A lot of these hunters walk up and thank me, but I thank them. It’s the best three days of my life every year. We already see what the kids are going through, but to watch what the parents have to do on a day-to-day basis to take care of these kids, that’s something you’ve got to admire.

“To watch these kids get their first deer or best deer, those smiles will never go away. We’ve been doing this for 25 or 26 years, and it just seems to get better.”

Go to http://buckmasters.com/resources/disabled-hunters/badf-life-hunts to find out more about the Buckmasters-sponsored hunts for hunters with disabilities or life-threatening illnesses.

Visit www.outdooralabama.com/physically-disabled-hunting-and-fishing-trail to discover the opportunities available on Alabama’s Hunting and Fishing Trail for People with Physical Disabilities.

Sorry, there are no recent results for popular articles.