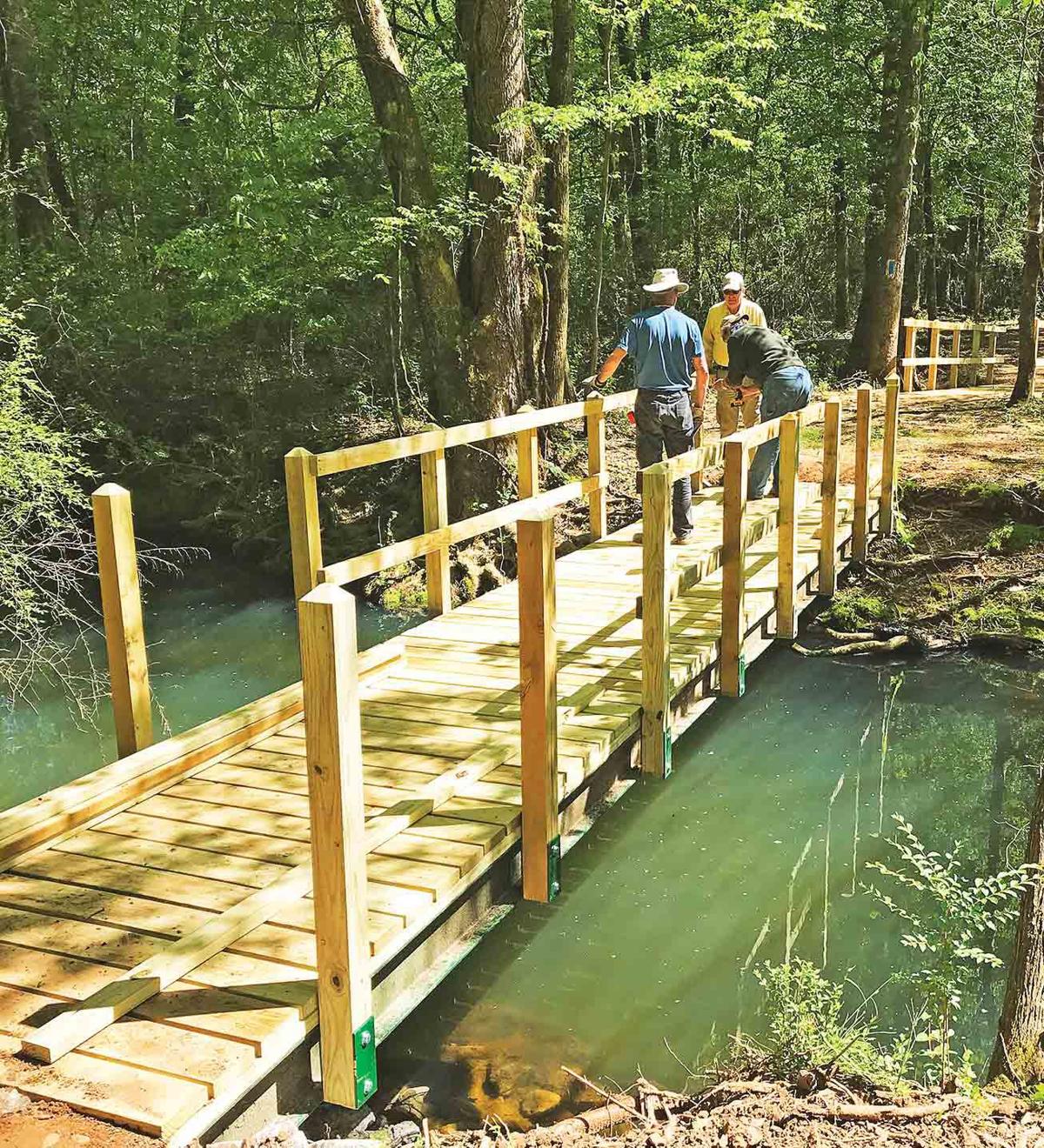 Members of the trail crew put the finishing touches on a bridge over Neeley Branch for the Awesome Trail in Joe Wheeler State Park. 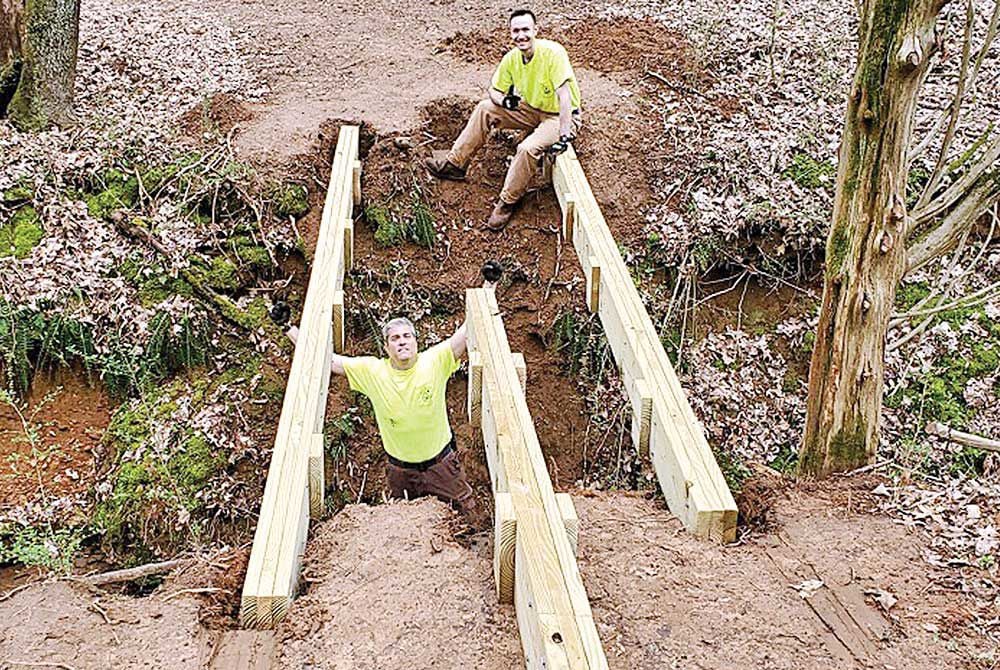 State Parks Trail Coordinator Ken Thomas stands in one of the numerous ravines the trail crosses. 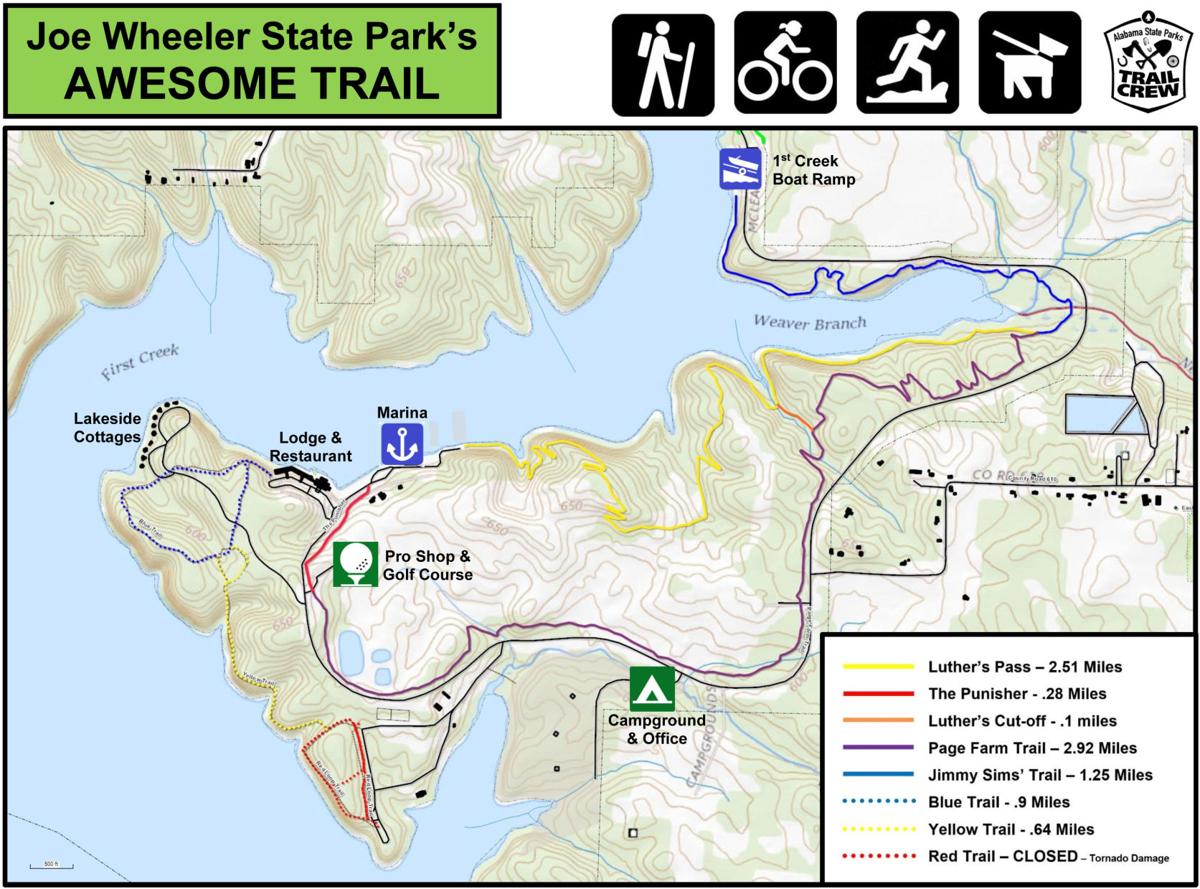 Members of the trail crew put the finishing touches on a bridge over Neeley Branch for the Awesome Trail in Joe Wheeler State Park.

State Parks Trail Coordinator Ken Thomas stands in one of the numerous ravines the trail crosses.

Those who love to explore nature have another opportunity with the opening of the new trail at Joe Wheeler State Park in northwest Alabama. The name of the new 8-mile pathway is the Awesome Trail. Seriously.

According to Ken Thomas, Alabama State Parks Trails Coordinator, naming the trail resulted from a conversation he had with Chad Davis, State Parks’ Northwest District Supervisor.

“I told Chad this trail is going to be awesome and it stuck,” said Jamie.

Thomas said the Awesome Trail was constructed through a Recreational Trails Program (RTP) grant with accessibility for a variety of users in mind.

“We tried to create a trail that could be used by walkers, hikers, mountain bikers and trail runners,” said Thomas. “The biggest consideration for making it compatible for everybody is that it had to be wide enough to support all of those folks. These type trails are wider than most trails people are used to. This allows people to walk side by side, and it has enough room that a biker or jogger could still pass.”

Before he became the trails coordinator, Thomas spent most of his time as superintendent at DeSoto State Park which has some of the most beautiful mountain scenery in the state. He didn’t expect what he found when he went to Joe Wheeler to establish the new trail.

“The terrain was very surprising,” he said. “It’s steeper than people realize. Joe Wheeler had minimal trails. When I started tracking it and figuring out where we were going to put the trail, we ran across several challenges. The terrain going into the Tennessee River and First Creek is a lot steeper than we realized. We had to do a lot of bench cutting, kind of carve the trail out of the terrain to create a level trail bed.

According to Thomas, the water flow in those ravines is seasonal and can be easily forded. Some of the ravines had hard bottoms or could be manipulated to have hard bottoms while others were as deep as 8 feet and couldn’t be forded.

The new Awesome Trail has received rave reviews since it opened in mid-April as heavy rainfall kept most of central and north Alabama waterlogged.

“Rain was my biggest problem,” Thomas said. “When the ground is so wet, you’re doing more damage than good.”

“We dealt with some wet areas where we had to pick the best route to maintain the environment. We also found a tremendous number of ravines.”

“We wound up installing 16 bridges,” he said. “Seven of the bridges were 20 feet long and two were 30-foot bridges. That was a challenge. We were only able to keep three fords and still keep the environmental integrity of the stream.”

The actual construction of trails has advanced dramatically in the past decade. In fact, Thomas has become the first trail builder in the state to receive his HETAP (Highly Efficient Trail Assessment Process) certification.

“I chalk up HETAP as an example of American ingenuity. Somebody computerized it and received a patent. One person can take this HETAP machine and assess a trail. “I think what makes this trail so special is that we went to great lengths to bring people to some of the most beautiful parts of the park that we could find,” he said.